The first day of the year, dusk, about three-thirty, near the top of Endell Street. At the foot of a tree, items recently discarded, including a colourful new and unopened pack of pastels. One object when disturbed proves to be a music box, already primed: it emits its tinny, sentimental chimes into the empty street. It feels like a set-up, a scene from a weak television drama; it isn't comforting.

I tell a friend about it by email. With Midland speech patterns in his response: 'Dystopian, is that!' He attaches to his reply a photograph purported to be recent and of a terrapin riding the bloated corpse of a dog or fox afloat on the Regent's Canal.

In previous years, Ramadan was the evening sound of people coming and going in this block and the one opposite. Shouts of their children in the stairwells and courtyards, instructions, directions, for parking arrangements and the burdens of pots and containers of food for Iftar. This last year the fasts were broken quietly and no-one came or went.

Late June. A street preacher of the Christian variety is occupying a self-delineated space outside the Salmon, stepping forward and back across the pavement as she rants. We are doomed; she is exultant. One of a passing couple remarks: 'Everyone off their meds now... everyone.' From somewhere just beyond the Sainsbury's Local queue comes a tentative contribution of: 'Allahu Akbar!'; which may be an endorsement or an attempt at inter-faith dialogue.

July. The presumption in favour of avoiding proximity encourages performative clarity in pavement occupancy. Nevertheless, I am unable to escape an embarrassing pas de deux with a fox when passing through the passageway beneath a neighbouring block of flats: it takes a few feints to sort ourselves out and the beast gives an impatient snort as we do so. Later that day and returning via the wider, parallel alley, I end up in step with surely the same fox. We each maintain the greatest possible mutual distance, but without one of us just stopping we will be sharing this path for several dozen yards. So we proceed with city-dweller's etiquette, as if unaware of each other. Then one of the cats affiliated to the pub at the end appears coming the other way, pauses, then not to lose face by retreating or scaling a wall, carries on its way between the fox and I, ostentatiously ignoring us both.

Metrocentric gets your laundry every time 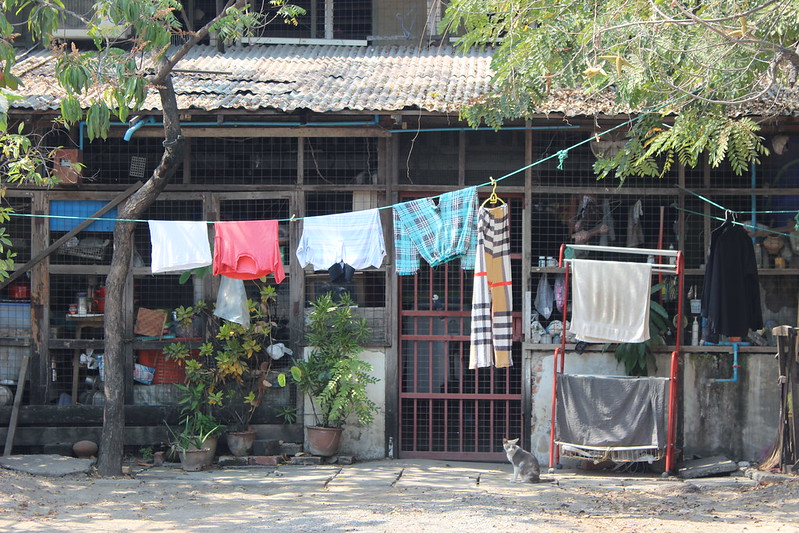 St Pancras: gas holders repurposed as cages enclose new drum shaped residential blocks. That's behind me and before me the canal. It's a weekday lunchtime in summer. A woman passes by on a bicycle and as she does so a small dog leaps from her handlebar basket, into the water. She's dismounting in the swiftest manner possible and serendipitously a man running close behind reaches into the brackish soup to scoop out the hound.

She's thanking him profusely, she says the dog must have thought it was like the pond at the park, and the man is happy to have helped and now he's running on. She's vigorously rubbing the beast dry with a small blanket and chattering away to it, tones of reassurance and admonition by turns. She and it and the bicycle are strewn across the towpath.

A man walks by and she engages him in conversation: the incident is recounted. He passes on and she is busy with the dog, the blanket, the bicycle, more contents of the basket. Preparing to leave, yet not leaving; taking up a little more of the towpath than before.

A couple appear and she waylays them to tell the tale. Then another pedestrian is regaled, and so on. The woman and her dog and her bicycle and everything else are now fully in occupation of the towpath and to pass them a toll must be paid. It's been ten minutes now and she's not going anywhere.

Later I'll think I understand why she is doing this - telling the tale again and again, thereby apprehending and assimilating the incident and in so doing reducing its shock. And isn't this what our fellow people, society, are for?

But for now, when there are no more passers-by her attention is bound to turn to the occupants of the benches bordering the new flats. I'm off, quickly; I think I can hear her voice behind me but I'm not turning around.

The automated announcements on the Luas are delivered in an assertive tone. When she says: 'Please move down the tram', her delivery stops just short of an exclamation mark and despite being appropriately seated you wonder how best to obey her. She declares the stops in both Gaelic and English. The longer, varying titles have the value of a language lesson; the shorter names, sound identical in either tongue so repeated, like command and reprimand: 'Raghnallach. Ranelagh.' [back here boy and out the road you idiot hound] 'Doiminic. Dominick.' [put that down now you wicked child].

It had been a very long time since I last heard the term 'skin-popping' in conversation - not since the late 1980s. Then just the other week, over two days, twice: one afternoon in Stoneybatter, the next morning by the Wholefoods mimic at Smithfield. On the latter occasion more detail was available - with the air of a jaded phlebotomist a young man was explaining to his customer the eccentricities of her misused circulatory system, and alternative means of getting his product into her bloodstream.

In Tallacht, digitally rendered representations of intended uses are pasted to the windows of vacant ground floor units, in the customary manner. A scene of a cafe includes no customers, but a solitary member of staff, whose gaze reaches beyond the room with an expresion of troubled yearning. Another tableau, another cafe: there are two customers at opposite ends of the depicted room, one has her back to us, revealing nothing; the other is facing away from her table, hunched over and absorbed in her phone. These images are almost subversive in that they portray the interiors less as a typical developer's aspiration, more as the alienation and anomie we can expect to see in reality. They also owe a considerable debt to Edward Hopper. 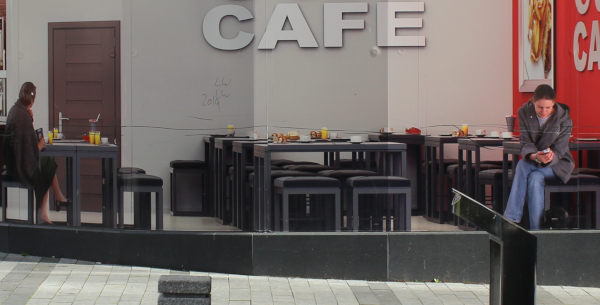 On the corner the former fire station is occupied by Buddhists; variants of yoga and mindfulness are practised there. The other morning, early, two pale young men were at its entrance, verbally altercating; they were in disagreement and had Taken It Outside. As I passed I heard one to say to the other: "...I hear that, I accept that, but how you make me feel, when you..."

Out of the disused public toilet at the corner of the gardens by the tube station, a small bar/restaurant thas been contrived. Before this establishment was installed a coffee stall was displaced, the eviction being effected passively: the proprietor's power supply was cut off. My initial impression of the new establishment was of the generic cafe background scene in a television series, or the aspirational images depicted on a retail development hoarding. Later an acquaintance remarked that it "...looks like something off of fucking Hollyoaks", which I think is the same thing in fewer words.

In the evenings, the whir of Ocado vans and the buzz of food delivery scooters; my block is one of three with the same name and the mopeds move from one to the next in confusion, nosing around the corners, like bees at a rose bush.

My building was a place where cleaners lived; now several of my neighbours are visited weekly by cleaners.

The process of economic, social and cultural change locally is not so much one of gentrification, but suburbanisation.

A Saturday in light rain, and he was lost. He showed me the map on the screen of his phone, but those streets were not near that which we were in. Perhaps he'd emerged from the Underground and the GPS, or the mast triangulation, or whatever it is that allows spatial location of a device, had not caught up from his last detected location.

He was showing me Notting Hill Gate and we were just off the Farringdon Road. What was he at?

I reckon it's a psychogeographer's delusion, that navigating through one place using the charts for another - countermapping - can be rewarding. I've tried it: for me it just obscured the pleasure of being lost. Moreover, psychogeography is largely an older man's game, and this fellow was a lot younger. Additionally, he exhibited convincing symptoms of one who wants to find a place, with some urgency, having for some time been in search of it.

He could swipe his screen about as far as Marylebone, then it would flick back west to the foot of Pembridge Gardens. He said, he didn't know the name of the place he was seeking, but he would recognise it if he saw it.

He looked stressed; that he needed to be in that place by now.

I am reminded by

that of the LRB, and by association at this time of year, Alan Bennett's diary. Impossible not to read it in one's own approximation of his gentle, Yorkshire accent. Sorting out the link to the website version, I find Bennett has supplied his own narration of it, see top of page. So now I've enjoyed it all over again, as read to me by himself.

"In the National Gallery’s picture [The Supper at Emmaus] Christ, suddenly recognised by the company at supper (and also with downcast eyes), looks plump-cheeked and almost debauched, a grown-up version of one of Caravaggio’s grape-eating boys."

I was pleased that I could meet them together. They'd split up now, but were by no means estranged. Even now, after years, I saw a frame around them.

Their Sunday lunch invitations were often at short notice, and I didn't always accept them, but those I did, I enjoyed. Always mid-afternoon; any earlier and they wouldn't have been awake. They always had a Bloody Mary for me, with a decent charge of Absolut Peppar in it, 'for your hangover'; whether I had one or not. Then he or she would say: 'Now we'll have to catch up with you', and they did.

They'd dance in the kitchen when Kylie came on the radio. On warm days the garden door would be open, letting in bees and the noise of planes.

She said: 'We never rowed when you were round', then quickly: 'He still calls it London Fascism Week 'cause of you'. I replied 'It's big and it's bland, full of tension and fear, beep beep'.

He had been talking to her friend, who was also along; he turned to me and said '[Metro] she doesn't realise how much she taught me about fashion. When you're into someone and you want to know about them? What's important to them? I learnt a lot.' He could be so immediate, open and direct, and he had not lost that.

Having cleared the feint, I said: 'Was that why you had me over?' She replied: 'Sometimes... so as we were on our best behaviour'. I asked, in more words than this: was I that austere? 'You calmed us down', she explained; turned to him then: 'Didn't he?' 'Yes, you were a calming effect'.

I'd always suspected something of the kind. For couples, Sundays can be the best and the worst. I said: 'I was like the donkey they put in the horsebox to stop the horses panicking on the way to the racecourse'.

And they both said, oh no, not just, but yeh kind of.
Collapse